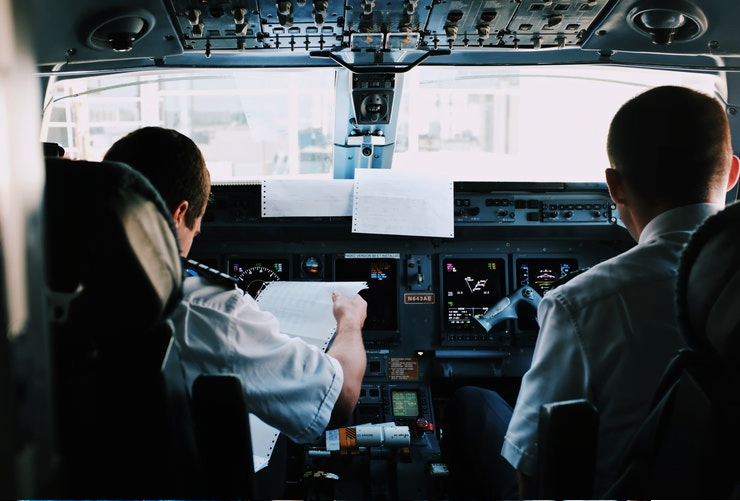 There are some things you are NOT informed about when you board an airplane…. But we tell you everything!

The operation of an airplane is full of mysteries for us little travellers! And above all, full of secrets, such as how stewardesses and stewarts rest during long-haul flights. Well, we’ve decided to reveal 8 other well-kept secrets, and for good reasons…!

If it your first travel abroad, we highly recommend to check the 10 Mistakes To Avoid On Your First Trip  plan your first trip

>> Here’s How To Guarantee You Get The Cheapest Flight Available, EVERY Time

1- Pilot Food in an airplanes

Being a pilot gives you the right to a first-class menu. Not bad, is it?

Yet, pilots have two different meals and are absolutely not allowed to share, it is a precaution in case of food poisoning. Moreover, it is a rule that is taken VERY seriously.

In the same way, pilots are not even allowed to eat similar dishes prepared in the same kitchen during the six hours before the flight.

Then, if one pilot have fun stealing food, even if he throw it away, it is considered a serious legal mistake.  He can get fired instantly for it.

A total red line to not cross.

Be careful, it should be noted that there is only between 13 and 15 minutes of oxygen in these masks in case of depressurization of the cabin.

Yes. In case of depressurization, when the mask falls in front of you … you will only have about 15 minutes of oxygen from the time you pull the mask towards you. That’s all.

Why having only 15min of oxygen?

Here is the scenario.

The aircraft is at its cruising altitude (more than 10,000 meters for long haul flights, slightly less for short flights).

The cabin depressurizes. Then the atmospheric pressure drops abruptly. So the air empties of its oxygen, creating unbearable conditions for human organisms. Holy sh*t.

Now! The pilot must descend the aircraft as quickly as possible to an altitude of 10,000 feet (about 3,000 meters). And it takes no more than 13 minutes to make this descent, which explains the 15 minutes of oxygen in the masks.

By the way, a crucial information here about airplanes !

At altitude (10000 miles), you only have about 15 seconds before you faint, if you don’t put on your mask immediately. That’s why, even if it’s counter-intuitive, it’s absolutely essential to put on your mask first, as a priority, before taking care of your children’s mask. If they faint for a few seconds, you can save them with your mask on.

By the way, did you know the 10 Essential First Aid Items You Should Never Forget when Traveling?!

3- Aircraft can fly with only one engine running.

You know, in the movies, when the engines fail, ignite and the airplane goes straight to the ground. Well, that’s not how it would work in real life. And fortunately. If both engines stopped at the same time, the aircraft could continue to glide 6 nautical miles, or 11 kilometers, for every 1,500 meters of altitude.

So at 10,000 meters, your airplane can continue to glide for about 77 kilometers without an engine, and allow a (relatively) smooth landing. This is why most serious aircraft crashes occur during takeoff or landing, with the flight phase being the least dangerous.

And don’t freak out!

Pilots regularly train on simulators to fly or land with a single engine.

4- An absolute NO NO in an airplane

Whatever you do, don’t drink the water from the sink. Personally, we wouldn’t even dip our hands in it to wash them!

The water tank is cleaned at regular intervals, but parasites and microbes eventually develop resistance to detergents.

Even more, NEVER drink water from a airplane if it does not come out of a bottle. Don’t even touch her.

And coffee and tea?

The water used for hot drinks is very dirty. It comes from the same tanks  (almost never cleaned 100%).

Some bad mouths say in private : « On older aircraft, there is so much disgusting stuff accumulated on the walls that it can form a crust 1 centimeter thick. This is something that is well known to all those who work on aircraft. »

Trending ! Booking Your Cheapest (Yet Comfortable) Airplane, Without Spending Tons Of Your Valuable Time, And Without Being Screwed. A Step-by-step Guide By  a Travel Addict

5- Where flight attendants and pilots rest on very long flights?

On long-haul flights, some crew members work up to 16 hours a day.

If you’ve got tired, the crew is at least as tired, which could become dangerous!

But how do they keep fit and alert? There is no miracle solution, they sleep too!

Where? Because an airplane already seems full when you get on it. And you can’t imagine where their rest area would be.

If they don’t have first-class suites like Emirates Airline passengers, most Boeing 777s and 787s are equipped with secret hatches with stairs that lead to private rooms so that hostesses and stewarts can rest. Pilots generally even have a private room.

This area is carefully hidden and the airlines refuse to reveal their location to ensure optimal peace of mind for flight crews.

6- Why some airplanes leave white streaks in the sky, and some don’t?

White streaks appear in the sky due to the condensation of water vapour produced by fuel combustion.

When transparent water vapour comes into contact with the rarefied and cold atmosphere, it immediately transforms into many microscopic ice crystals. The latter diffract light like clouds. The duration of streaks depends on the amount of sunlight and humidity in the atmosphere.

If the air is dry and sunny, the ice crystals evaporate very quickly. Otherwise, the condensation trails may remain for a few tens of minutes.

7- If the airplanes land without any light on board during the night,

… it is so that your eyes get used to the dark.

Why? So you can evacuate quickly in case of emergency.

Also, because an evacuation should (in theory) be carried out in 90 seconds. So there is no time to waste with the passengers’ eyes acclimatising to the darkness.

8- If pilots land abruptly in rainy weather, it is not because it is more difficult…

When you feel a hard landing in bad weather, it’s not because the pilot is not competent. On the contrary: it’s completely intentional. If the runway is covered with water, the aircraft must touch down firmly so as it adheres as much as possible. No aquaplaning.

« I have a fellow pilot who likes to say this sentence: »A landing is ultimately nothing more than a controlled crash » one 30 years experience pilot told us.

If a passenger causes a scandal when boarding and takes everyone with him or her, the pilot has every right to deny them access to the aircraft and take off without them.

Once the aircraft doors are closed, the pilot is the only master on board and has almost unlimited authority. He has the right to arrest someone, write tickets, and even take the last wishes and wills of a dying passenger.

10- Many more domestic flights than you think carry human remains,

… bodies in coffins (repatriation of bodies) or organs.

« I can tell you that you’ve probably travelled with this kind of thing without even knowing it. Look out the window and see if you see one of these long boxes with a « head » on one end… If you see one, it’s just a coffin. »  one operations agent told the Newyorker.

>>> Don’t Buy A Single Flight Until You Read This Simple How-To, and Easy-To-Follow Guide To The Cheapest Flight Available For You Today.

11- And some general information rarely shared by the crew:

Airplanes are struck by lightning very frequently. But, it is totally safe and no one feels anything, because the cabin acts as Faraday’s cage.

Be aware! The headphones you are given in aircraft are far from new. Although they are wrapped in a small plastic, these headphones have just been cleaned after their former user….

Don’t panic. The toilet door can be unlocked from the outside in case of emergency.

Sad but unfortunately true.  Airlines do their best to treat pet animals in the hold properly. But know that despite this, their poor ears suffer an unbearable noise!