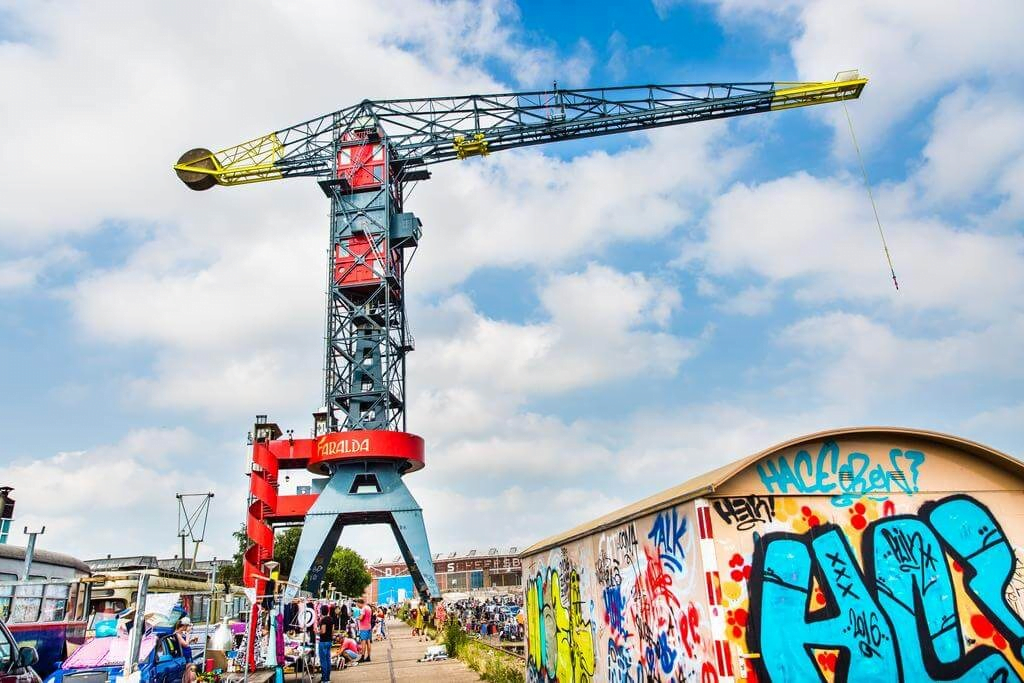 Hotels around the world are surpassing themselves with creativity and ingenious ideas to seduce those of you who are looking for unique and exceptional experiences.

Through this selection of hotels combining adventure, spectacular landscapes and impressive architecture, we take you on a journey to discover some of the most unusual hotels in the world.

If you had to choose one, which one would it be?

New to travel? You might be interested also in : The 10 Mistakes To Avoid On Your First Trip

Popular! « Since February 2013, we have traveled the world through house sitting, enjoying 95% FREE lodgings, saving us on average $40000 a year ». Here is How!

After a long renovation phase, this old crane became a luxury hotel in 2014, the Faralda. Its 3 suites « Secret », « Free Spirit » and « Mystique » are suspended 50 meters above the ground.

Where? above the industrial wastelands of NDSM, in Amsterdam, (Netherlands) the district of choice for artists, skaters and young entrepreneurs.

Each room has its own unique decoration and an outdoor jacuzzi. It simply offers an absolutely breathtaking panoramic view of Amsterdam.

Do you like thrills? Good thing, you can jump into the void from the Faralda, since it offers a breathtaking and unique bungee jumping!

2- A hotel in the middle of an imaginary world

The continuation of the « Trojan Horse » at the Gnomes’ Ballad. Pascal Schijns

The Gnome Walk in Durbuy has adopted Picasso’s motto « Everything that can be imagined is real ». So expect something unexpected!

Each of the 10 suites tells a story: « The Legend of the Trolls » is a must for fans of fantasy.

« Macquarie Island » is made for those nostalgic for the sea with its sailboat and private beach. And « On a Moon District » is ideal for anyone who would have liked to be there the day we made the first step on the moon!

And for a legendary and medieval adventure, embark on board the « Trojan Horse ». With its two floors, it looks more like a cow, well, we say that, we say nothing…!

3- Spitbank Fort: In the middle of the ocean

In the waters of Solent, the inlet that separates the beautiful Isle of Wight from the mainland, you will find four marine forts which form an invisible square. Military fortresses, they were erected at the end of the 19th century to protect the English crown against Napoleon III’s invasions.

St Helens Fort is a private estate, Horse Sand Fort has been converted into a museum, while Spitbank Fort and No Man’s Fort open their doors to a few privileged people for a unique stay.

Spitbank Fort was the first of the four forts to be completed. Its commissioning dates back to 1878, after 11 years of titanic work. Surrounded by water – its walls are 6m thick – Spitbank is an absolutely unique hotel to stay in the United Kingdom today.

The 150 soldiers and their ammunition gave way to 9 luxury suites, a neat kitchen, three dining rooms, a library. You will find also a Laurent-Perrier champagne bar and a wine cellar and, on the open-air terrace, a 360° view, a heated swimming pool and a sauna.

Can you stay in a prison where the living conditions of the prisoners are enjoyed… by the guests?

This is what the Karosta prison in the city of Liepaja in Latvia offers. The idea may take many people away, but curious people and dungeon enthusiasts are having a great time.

Karosta Prison is a Latvian prison that has been used by the Tsarist autocracy, the Nazis and the Soviet army. In the 1990s, the prison became a museum. It was later transformed into a much coveted hotel and tourist attraction. The treatment of tourist prisoners has given the institution a reputation that now crosses borders.

To undergo delinquent/criminal treatment, you will have to pay 12 euros. An iron bed, a prison meal and the nightly harassment of the guards are promised.

A charter that sets out the characteristics of the physical and moral treatment that will be inflicted on « prisoners » must be signed before starting this unique experiment.

Find remember that the hotel is only open from May to October. But then, bring with you the 10 Essential First Aid Items You Should Never Forget When Traveling!?

>>> Smart Home-Sitting: Travel right NOW no matter what your financial situation, while staying in amazing local places with all the comforts of home.

It is the largest Beagle in the world (3 m high!)! A hotel dedicated to dog lovers, from the inside of the rooms to the furniture.

Artists specialized in the manufacture of wooden dogs (with a chainsaw!), Frances Conklin and Dennis Sullivan had the idea in 1997 to build a bed & breakfast in the shape of a dog! Located in the city of Cottonwood, Idaho, USA, Frances and Dennis wanted to pay tribute to the time of the car holidays when hotels with unusual architecture could be found on the roads.

Inside, there are all the amenities: bedroom, kitchenette, bathroom with bathtub in the body, additional bedroom for children in the head. And as its creator likes to remind us: « We made it simple, the pipes are in the back!

In the magical Cappadocian landscape of magical chimneys, in the ancient village of Urgup, there is a luxury hotel dug into a mountain cliff: the Yunak Evleri. This hotel includes six cave dwellings, 30 rooms dating from the 5th and 6th centuries and a 19th century Greek mansion.

Cappadocia, located in the heart of Turkey, is a popular tourist destination for its unique geological, historical and cultural features. The Cappadocia region is largely composed of sedimentary rocks formed in lakes and rivers, and ignimbrite deposits erupted from ancient volcanoes.

You’ll love to visit it if you are a geological/history fan.

What will you find?

Six unique cave dwellings were converted into a 30-room hotel (Completely empty in 2000). Each room has been furnished with Ottoman antiquities, a personal spa and a patio. The rest of the hotel is a restored 19th century Greek mansion located next to the impressive caves.

This splendid 747 first flew under the colors of Singapore Airlines. It was bought in 2006 by Oscar Diös, a Swedish entrepreneur, who transformed it into a hotel on the tarmac of Stockholm Airport.

On January 15, 2009, the Jumbo Hostel, the world’s first hotel built on a real Boeing 747-200 Jumbo Jet, opened its doors to transit passengers, aviation enthusiasts and curious.

The different categories of rooms, double or family, can accommodate one to three adults. Also available is a « dorm-bed » or dorm-bed with 4 beds. But you will love the luxury suite in the cockpit with a panoramic view of the airport. The cabins are equipped with a flat screen and wi-fi; the shower and toilet cabins are in the corridor.

Hot New! The 11 Things No Pilot is Allowed to Tell You About Airplanes

When the history and traditions of a country meet architecture and a luxury hotel, you get a little gem: Quinta Real Zacatecas in Mexico City. The idea is simple: to rehabilitate a 19th century bullfighting arena into a superb luxury hotel in the city centre while preserving the spirit and the stones. A successful bet!

The redevelopment of this impressive building, which respects the atmosphere and history of the site, earned it the International Architectural Award for Architecture since its inauguration in 1989.

5 stars and as many floors, 49 suites, a restaurant, from 141€/night, that’s for the figures. But beyond the figures, it’s indeed an art of living that you will discover in this unusual luxury hotel.

Next >> Discover the 20 Mistakes You do NOT Want To Make At The Airport (Will Cost You time & Money & more..)